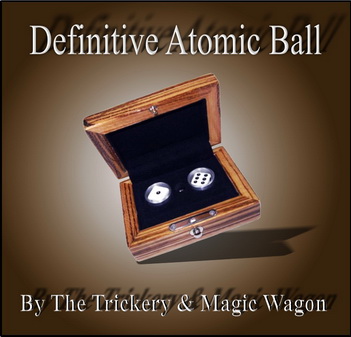 The game of chance played by the wealthy and powerful.

One world leader plays against another and
the end result is all or nothing.

You show a small elegant box which is then opened to reveal a pair of dice,
two metal cylinders and the Atomic ball, a shining silver sphere.

The dice and cylinders are removed from the box and
then placed on the table for inspection.

What happens next depends on a simple roll of the dice.

You remove a center block from the box that holds the Atomic Ball, carefully removing
the ball and placing it gingerly into the hand of an audience member.

The empty block is placed back in the box and the box closed.

One of the dice with the 1 spot showing is placed on the box top.

The die is covered with one of the metal cylinders.

The Atomic Ball is gently placed atop the die.

The second metal cylinder is stacked on top forming a small tube.

The second die is now placed atop the Atomic Ball.

This die has 5 spots showing.

It protrudes from the top of the tube due to the Atomic Ball.

Of course the combination of numbers, 1 and 5 do not make for a winning outcome.

As you explain this, you turn the top die so that the 6 is showing, creating a
lucky 7 combination, and place it back on top of the Atomic Ball.

Suddenly the top die sinks into the tube.

You dismantle the tube and clearly show the dice and cylinders.

The Atomic Ball has now gone.

With empty hands you unlock the box and open its lid.

The Atomic Ball has now returned safely to its secure place back within the box.

This is truly the definitive version of the Atomic Ball effect.

The box is made from exotic zebra wood.

Manufactured in 2008 by Magic Wagon Thailand.